Messi love story ;The Barcelona supper star is at  the moment, incredibly happy with his wife and two kids .

Most people are still surprised and the question keep coming to heart… Why did the best football player in the world fall in love with the daughter of a supermarket owner in his hometown?

Just How did their love story begin?

I have a complete story line of how this exquisite love story went, so keep reading because you’re about to learn many interesting facts about Messi’s wife. 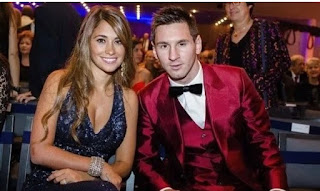 Where and When did it all began!

Lionel Messi’s wife name is Antonella Roccuzzo. The lady’s parents are the owners of Rosario shops. Messi and Antonella his current wife met at the age of 5.

1996 was the starting point of their happy relationship . At the time, the lady’s cousin, Lucas Scaglia who was a close friend of Lionel Messi spent a lot of time with both Messi and Antonella.

The communication in this friendly company allowed the future spouses to get to know each other better.

Given their continually closeness and good times spent together, It ended up sparking an interest among one another.

On a very good sunny but warmth day, the boys went to the bank of the Parana River and Antonella came with them. Although Lionel Messi was only nine years old at the time  he already had the feeling he likes this girl.

It was pure puppy love then maybe you could call it Agape love 😍 . But at that point, his interest in her showed.

To show he truly loved and cared about her, Messi often wrote her letters where he once told her that when they grow up, she will be his girlfriend.


About their Adult life

So At the age of 21, Messi was more a man then at 5  now it became clear he actually wanted to spend the rest of his life with his childhood lover so, the relationship reached a more serious level and everyone knew about it.

The public found out they were a couple in 2009. During an interview, Messi was asked about his personal life and he said that he had a girl in Argentina who made him relaxed and happy.

Since then, Antonella became an integral part of the life of the football player Lionel Messi. 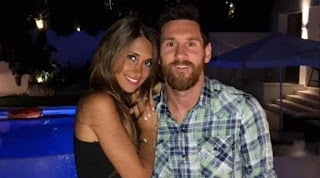 The paths of the lovers crossed again when Antonella was studying at the Latin American Education Centre, and the football star had to go to Catalan capital.

Were they had little issues

However, Messi was always unavailable, after he moved on the quest to become the world’s best player for five consecutive times.

Then for three years, Antonella dated another guy who lived in their hometown while Messi went away to get started on his career path. But Unfortunately, Antonella’s lover died in a car accident.

So she met Messi again, “true love never dies as they say” their childhood friendship was rekindled.

When he heard about the tragic accident, Messi went to Argentina to support his friend. Although Leo and Antonella felt their affections for each other grow during the visit but they kept it a secret at the time.

Messi eventually returned to Barcelona while Antonella was studying at the Rosario National University.

She was excellent at her studies so After completing a six-month course, she began to work with social communications.

Most People close to Lionel Messi’s wife say they learned about her love affair with Messi in 2007. For many years, the couple kept their relationship quiet.

But all doubts disappeared in 2010 during the championship in South Africa. She was there with her beloved and it was very clear they were couples.

It was a total celebration on June 2012, another big secret was revealed. During the celebration of the stunning goal at a game with Ecuador, the audience learned that Antonella was pregnant.

The first child of the best player in the world then and his wife decided and  named him Thiago. He was born in November 2012.

To sum up the anticipation that lingered in the heart of he’s fans, During 2014-2015 football season, Messi told his fans and social media followers that they were expecting a second child.

He called him Mateo, the second son, was born in September 2015.

In addition,  Antonella’s patient remained the key. And honestly, it’s something to admire because such  patience aren’t in girls of nowadays.

All his life, the footballer knew what kind of woman he wanted and she was patient enough to wait for him to achieve his dreams.

Lionel Messi’s wedding with Antonella Roccuzzo was just a matter of time. The weeding ranked top 10 in world’s history wow!  you wouldn’t expect less will you?

Their lavish wedding took place this year, just a few months ago. since then it’s been happy happiest for both of them.

In conclusion on Messi love story

There is a lot of lessons to be learnt from Antonella Roccuzzo And Messi’s life.

From the start to finish it seem as though everything was planed things kept working according to plan for their both.

From my article there was ups and downs for them both but you see patient was the keys for Antonella.

She knew what she wanted she stood for Messi despite all his shortcomings and staying away for too long.

You can learn from this gingle love piece if you wish…  happy married life Messi!

Sexual attraction is the point of romantic relationships, if it’s not then live with your siblings – Brymo

Sexual attraction is the point of romantic relationships, if it’s not then live with your siblings – Brymo Nigerian singer, Brymo has shared his thoughts […]

Shocking! Farmer arrested while allegedly attempting to smuggle hard drug for his son in detention (photo)

Coronavirus: FG Announces It Will Evacuate Nigerians In China