In USA ATLANTA – Security officials confirmed to Channel 2 Action News that they detained rapper T-Pain on Friday afternoon after he tried going through a security checkpoint with a gun at Hartsfield-Jackson International Airport. 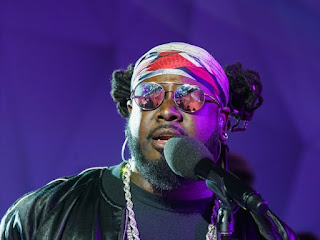 The police said the gun was found in a backpack belonging to T-Pain, whose real name is Faheem Rashad Najm. Investigators said the bag was being carried by his bodyguard, Carlos Aleili Flores.

Top R&B star T-Pain and his bodyguard were taken to the airport police precinct while officers looked into the situation to discover more.

Although it was confirmed that T_pain was in possession of a fire arm, “(T-Pain) advised that he was the rightful owner of the firearm and provided his valid permit to carry. (His) weapon was returned to him, and no charges were filed,” police said in a statement to Channel 2 Action News.

The Grammy Award-winning artist  T_pain took to Instagram, saying he might be “Might be a tad bit late today,” he captioned the photo. “Things at the Atlanta airport are getting………… eventful.”

News And Entertainment you can trust
Tell Your Friends

Anthony Joshua gets a to Nigerian National ID Card (Photos)

There is an ongoing plot to attack the national assembly – Lawan