In the wake of  of the recent release of nudes pictures on her social media page, Police in Lusaka have reportedly summoned controversial Zambian singer, Kay Figo for questioning after she went pantless in a semi-nude photo she shared online. 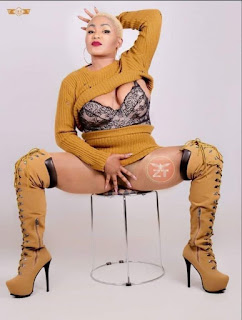 Cynthia Kayula Bwalya popularly know as Figo, shared the nude photo on her social media page on Thursday to promote her new music video ‘Taken’ which was released on that same day.

In the picture Figo was seen opening her legs wide open without any underwear in a sitting room position, as the lightly placed her hands in between her pussy to cover her private part.

According to police spokesperson Esther Katongo, the authorities will question the local female artist and hear her side of the story over the picture.

Katong further says if the picture is Photoshopped, the perpetrators will be brought to book.

A Policeman Has No Right To Check Your Phone – Dolapo Badmus (Video) The Public Officer of the Nigerian Lagos state Police, Dolapo Badmos, said […]

Buhari will not resign over insecurity; We won’t go back on Social media regulation FG Announces