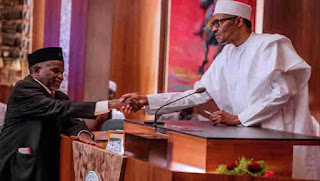 2. He attended Government Secondary School, Azare where he obtained the West Africa School Certificate in 1973 before he later proceeded to Ahmadu Bello University where he received a bachelor’s degree in Law in 1980. He later obtained a Master and Doctorate (Ph. D) degree from the same university in 1984 and 1998 respectively.

3. Tanko began his career in 1982, after he was call to the bar in 1981, the same year he graduated from the Nigerian Law School.

4. In 1989, he was appointed as Chief Magistrate of the High Court of Federal Capital Territory, a position he held till 1991 when he became a Judge at the Bauchi State Sharia Court of Appeal.

5. He served in that capacity for two years before he was appointed to the bench of the Nigerian Courts of Appeal as Justice in 1993.

The newly appointed CJN Tanko is the most controversial news trending on social media at the moment as it has already generated reaction from all kinds of individuals  with singer Davido, Senator Ben Bruce, Yakubu Dogora who is the house of Rep speaker has all reated to the act regarded as “Felony” by Buhari.

Anthony Joshua gets a to Nigerian National ID Card (Photos)

There is an ongoing plot to attack the national assembly – Lawan